There isn’t going to be any new encounter with a set of words, nor any new musical combination with them today. I’ve mentioned during the last part of 2020 how this project that has brought me much joy and surprise has become more difficult for me. There are complicated reasons of little general interest that contribute to this, but this week there are again public events that have made it harder for me to concentrate on work.

Unless you are meditating in a cave somewhere, and only check in here as religious penance, you may easily guess what events this week have waylaid me. I feel compelled, for no logical reason, to bear witness to them, to watch them closely over the Internet at my shelter-in-place distance. Yesterday and certainly today that Internet will be filled with opinions. Well, that’s always so isn’t it — even if it may be to some degree even more so today. If you need opinions, you can drink of them until you are falling over swollen with them. I won’t fault you if you do, because I have read and will read some of them myself. I say this only to say that there’s no shortage of them, and so I will be brief and circumspect. 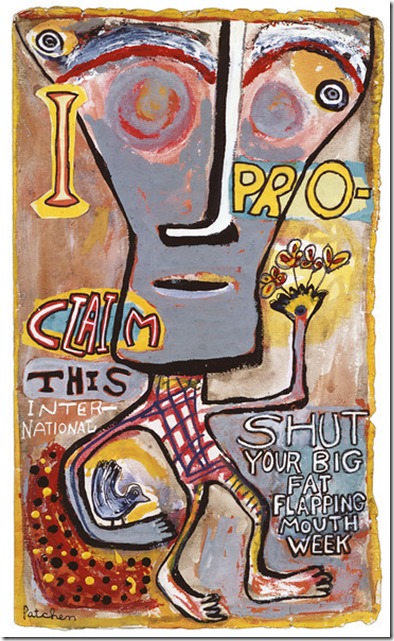 Painting by poet Kenneth Patchen who was also a pioneer in melding poetry and music, so don’t take this as some universal pronouncement. .

I revere democracy. Not because I think it incapable of monstrous acts. All governments are so capable, and if they exist for more than a brief moment, history testifies that capability will be exercised. Not because I think that our particular U. S. government structure is divinely inspired. Not because I’m likely to agree with what the majority of fellow humans believe about a great many things. I revere democracy because its evils are our evils, its good is our good — and that good is redeemable to outweigh the bad in us.

Whether the actors I’m observing are dressed as a Senator or dressed in a jokey t-shirt and a red half-billed hat, the desire — no, the actions — so brazenly presented and recently taken in the cause of maintaining the rule of a man so roundly rejected by our voters are obviously counter to that reverence. The Capitol building, the august chambers, are just symbols. Since many of us are writers, we know symbols can have a heft even if imagined, but still the real thing being attacked should be certain: democracy.

That’s right:  the symbol has bricks and glass, the real thing is something we need to hold in our hearts and minds, another thing that’s a verb not a noun.

Instead of a new piece, here’s one I’ve presented before, by another Reverend of Democracy, Carl Sandburg. Don’t miss Sandburg’s subtlety here. He admits right off that we can be a mob. When he says “The Napoleons come from me and the Lincolns.” He doesn’t merely mean that the notables, the big figures of history arise from the crowd. Sandburg means to contrast Napoleon who quickly became a military dictator with a Lincoln. We can bring both forward.

Here’s a link to the text of Sandburg’s poem, and my performance of it is available in this highlighted hyperlink, or via a player gadget you may see below. I still hope to be back with new pieces soon.

Last post I spoke of Mina Loy and her pre-WWI adventure in Italy with the Futurists who would eventually become Italian Fascists. Loy utilized Modernist tactics in her own art and writing, but she was apparently wise enough to see the violence and totalitarianism in that Italian strain for what it was and extracted herself to less authoritarian circles. I’m unaware that Loy ever presented herself as a politically engaged artist, but the various Modernists she associated with after the end of her Italian adventure tended to the unaffiliated or left-wing side of Modernism.

Another woman, and American this time, had encounters with the early German Fascists in the era between the two World Wars. Her name was Dorothy Thompson. Thompson is another example of fleeting fame: she had a substantial mid-century multimedia presence through her books, journalism, and work in broadcasting. One of her roles was as a Foreign Correspondent, something of an antique designation now, but one that required that individual to live overseas and to report wisely what was happening in that country’s culture and politics. In Germany she was savvy enough to cover the rising profile of a fringe politician, Adolf Hitler. In 1931 she was able to wrangle an interview with him. This is some of what she wrote:

When I walked into Adolph Hitler’s salon in the Kaiserhof hotel, I was convinced that I was meeting the future dictator of Germany….In something like fifty seconds I was quite sure that I was not. It took just about that time to measure the startling insignificance of this man.”

Thompson was nobody’s fool. She wasn’t alone in underestimating the possible impact of Hitler, this “little man,” based on his personality flaws. The canny observer in her was able to figure that he might be able to achieve titular leadership of the German government as part of a coalition with other minority parties, as Hitler indeed did little more than a year later. When asked what his program would be, Hitler was forthcoming: “I will found an authority-state, from the lowest cell to the highest instance; everywhere there will be responsibility and authority above, discipline and obedience below.” Hitler was generally not a secretive, conspiratorial revolutionary. This was his electoral platform. In evaluating that statement, Thompson compounded her error. Thompson concluded:

Imagine a would-be dictator setting out to persuade a sovereign people to vote away their rights?”

That wasn’t a prediction, that was a rhetorical question. She didn’t think it could happen.

She published her article that year, and many thought her view the informed opinion that it was. If TL;DNR existed in 1931 you would summarize: Hitler is a clown car short of a few clowns.

Thompson shortly realized she had been wrong. Less than three years after she had disparaged him in her widely read article, Hitler made Thompson the first foreign journalist formally expelled from his new Germany. Had she helped or hurt Hitler by underestimating him? It didn’t matter, she had belittled him. Soon enough the world would be at war due to this insubstantial and insignificant man, this laughingstock.

She had a dark-humored quip on the matter. “Some got sent to prison. I got sent to Paris.” 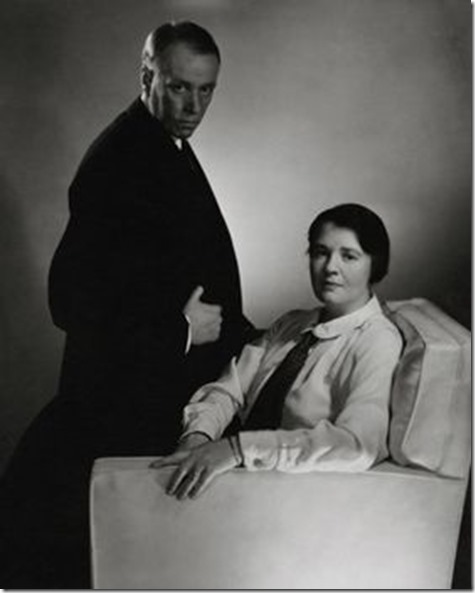 Thompson was married to another writer who was extraordinarily famous between the wars, Sinclair Lewis. In America, another politician was drawing from some a mixture of scoffing scorn and fear as he moved to run for President in 1936, Huey Long. It’s thought that Lewis availed himself of Thompson’s experience, as he began to furiously write a novel about how an American Fascist in all but name could unexpectedly be elected President. For his novel’s title, Lewis created an unforgettable phrase: “It Can’t Happen Here.”

The novel’s main character is a journalist, one who clearly knows that the forces which rise throughout the novel are evil, while underestimating their danger; but like Thompson he is able to recognize his error and take action. 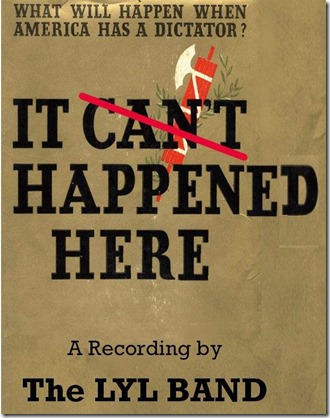 We are now living in a time when that phrase that Lewis used for his title may seem more present than memorable. The alternative voice of this project, Dave Moore, has changed Lewis’ tense and described—what—that 1935 novel, or something else? You decide if he changed the story.

The LYL Band’s performance of “It Happened Here” plays with the gadget below.