We are over half-way through Black History month and I’ve mostly spoken obliquely about it. I think that’s my nature. As poet I’m often doomed to reader response that they just don’t get it, and that bothers me, because in my mind I’m intending to link disparate things because I think that’s powerful. But in intending to do that, I make myself obscure—and painfully, some fine people who’ve heard or read my work think that’s my intent or my error.

So, when I speak about one of my discoveries, a law I think is strangely comforting: “All Artists Fail,” I’m speaking from personal experience. You may think, that’s not true about famous artist X or highly revered artist Y, but it is. Even those that are—for a time or for a long time—popular, many will not hear of them, many will not care for their work when exposed to it, and even those that are treasured and ranked highly, how many will understand what they are trying to do sufficiently? Some? Perhaps. Many? One hopes. All? Never. It’s good to aim for the some and honorable to hope for the many. Be prepared for the never-all however. Sequester or armor yourself against that or be prepared to take comfort in it.

That’s part of why this project has a principle of “Other People’s Stories.” More than 90% of the time the words I’m presenting and talking about here are not mine. Trying to encounter those words a couple times a week with an open heart and whatever limitations or strengths I have is the goal. I’ve done that here over the 420 audio pieces and the over 500 posts in the last few years.

The great majority of those that I present here are now dead, many long so. As my son points out to me, mostly white men too. One needs to interrogate the past to form the future. I have a culture I inherited. One that spoke English, was based in the middle of the U.S., and was as blinkered as any. Everyone inherits a culture. It’s inevitable, as inevitable as “All Artists Fail.” What do you draw from it for strength and inspiration, what do you oppose, what do you seek to add?

What can you find in what is not you? All those things. The future is not made of one heart alone, no matter how perfect, it’s made of many hearts. Good art can tear open our boney-caged chests and let us glimpse the beautiful glistening ooze within all of us: Chinese, African, Irish, English, indigenous, immigrant, and on and on. It’s right and wrong—yes, in some proportion, inside all of us—but it’s always beating as music and poetry does.

Long dead CIS white man Phillip Sidney wrote “Fool, said my Muse to me, ‘Look in thy heart, and write.” That can work. That can fail. My muse said, “Look in another’s heart, and no matter how dim your vision inside that swooshing pump, write there.”

More new audio pieces soon. But I was heartened today by a post over on the Yip Abides blog linking to a post from a couple of years ago here. Bob Roman has some very nice things to say about what’s attempted with the Parlando Project, things that reminded me why I do this. He also recomends that the archives here have a lot for those who’d like to find something different any day. The particular piece he linked to had Jimi Hendrix’s SciFi parable about an alien scout-ship dealing with observing life on the “Third Stone from the Sun.”  The alien gets it wrong, or sees that we get it wrong: the prime Earth species is a bird, not us warm blooded mammals.

We’ve just about used up two decades of our century, and that theory is still around. This quantity/quality audience-linkage belief is not always stated plainly, but it’s not hard to see its presence. Poets that rise to modest or surprising audience size will sometimes face some degree of backlash from critics. It may naturally be so that their poetry is less worthy by some criteria. This could be coincidental, honest criticism. It may be that it’s hard to find an audience for poetry criticism, as it is for poetry, so writing about better-known practitioners who have failed in some way helps grow the audience for the critic.

Another way to hold to this theory is to limit what poetry is allowed to do, to narrow its practice or even its definition. Spoken word or slam poetry? Not really poetry, or it encourages a poor selection of poetry’s virtues. Song lyrics? Self-evidently a different art, though given that the consensus canon of poetry is so different among itself, surely difference alone cannot be the criteria. Mix those two as rap or hip-hop and risk both  explanations of why it’s not poetry. Short, aphoristic poems? Too insubstantial. Long poetic forms once much in evidence, like the poetic epic or verse drama? No longer living forms of the art for the most part, if for no other reason than the type of poetic techniques the modern academic poet often uses can wear out an audience in a matter of minutes.

Myself, I don’t disagree or agree with those judgements in particular cases, and they could even be theoretically correct, I just viscerally dislike the idea that this thing poetry is so small and limited, that it’s a desert island disc for a few scattered islands, deeply loved by solitary coconut eaters with a very constricted shoreline.

When I break out of those narrow roles and rules for poetry, I will fail, and I do get discouraged. My limitations are bothering me two years into this project; and now 240 published audio pieces later, I may be running out of rules to break and the motivating pleasures of audacity. 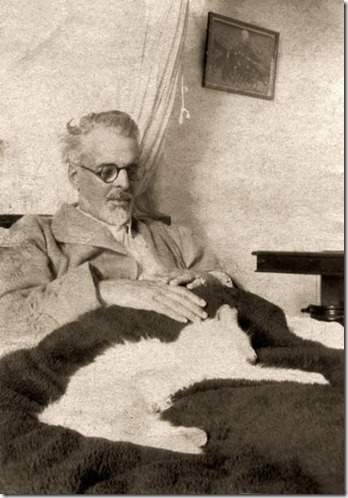 Also dreaming of catching fish. Are cat pictures the secret to gathering an Internet audience for poetry?

Here’s a piece today using a poem by someone who somewhat agrees with me: William Butler Yeats. In one way it’s specific to him, and his time. I’ve recently honored two working-class sport fishermen in one of my favorite pieces so far this year, but the fisherman in Yeats’ title, the simple man working his craft on nature to help feed himself rather than for hobbyist enjoyment—well, he, even in a much poorer Ireland of 1916, is admitted as imaginary.

Otherwise, how about those folks listed in the middle section of today’s piece that are harshing Yeats’ mellow? How little imagination is needed to see them today?

I admire Yeats in this poem, embracing his failure, even though he brought immense poetic talents to his work, so much so that I should be embarrassed to admit to that admiration. In one way, the fisherman here is Yeats, casting with deft wrist or verse, but not in the course of the poem catching anything. There’s a saying with the fishermen in my family, “It’s called fishing, not catching.”

But the imagined fisherman is also that audience Yeats seeks. Maybe once, Yeats says at the end, maybe once,  he can please an audience correctly, with a single valid poem and valiant audience—even if he can only see that audience in his imagination. I surely hope (and Yeats’ life helps me here) that the singular fisherman is an image for a possible greater audience, and not a headcount. After all, to write for something as large as “his race” (by which he means Ireland), is too small a target to hit, while that tweedy imagined fly-fisher inside his jacket might possibly expand to more countries, more times, more genders. In Yeats’ case, as with all artists, he failed; but he failed reaching for a larger audience with a larger poetry, a poetry which he risked allying with other arts. Many of us will not be able to accomplish that failure, but I’m glad Yeats tried.

You can hear my try to alloy William Butler Yeats “The Fisherman”  with a rock band by using the gadget below.