Here’s my performance of another poem from Irish-American poet Ethna McKiernan’s final collection Light Rolling Slowly Backwards.  In McKiernan’s later years of life she did social work with people who were homeless, and she dedicated Light Rolling Slowly Backwards  to “the hundreds of homeless clients I’ve worked with through the years — to their resilience, courage and care for each other.” Given that Ethna was somewhat frail even before her final illness, I marveled at her strength in taking that work on.

I recommend this collection, a fine summation of McKiernan’s poetry and its range. Here’s that link again to the Irish publisher of this book. 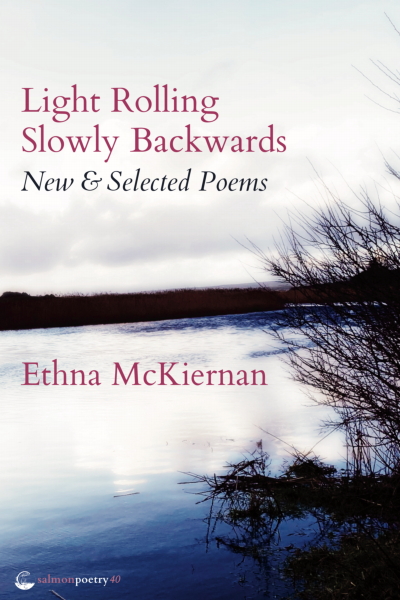 Why this one to start reading McKiernan? She herself created this “New & Selected Poems” book before she died late last year.

When I first encountered “Oh, Maria”  in draft form as a member of the Lake Street Writers’ Group I couldn’t help but flashback to my time working in Emergency Departments as a young man. As one side-point Ethna’s poem tries to convey the feeling of being next to someone experiencing a sudden, and unexpected death. I’d summarize those memories of mine as being full of intense experience, intent action, and if stabilization isn’t achieved, a solemn ceasing. Ethna’s account adds poignancy because it’s missing that middle part. I ached with her both as she feels guilt for not immediately recognizing the mortal nature of Maria’s incident — and then comes the line as she considers if she should have performed CPR: “If I remembered, God help me, how.”

I probably did my usual awkwardness in responding to that first hearing, perhaps mentioning how it reminded me of my experiences — something which was likely no help in her revision process. I think I did express that her missing the initial diagnosis of what was happening was not only forgivable, but par for the course. Could that have been worthwhile?

Indeed, my experience was that most people, even people who are otherwise medically trained, are likely to get this wrong in some way. Although my experience is now decades ago, I’ve seen CPR being performed on breathing people with a pulse — which is not a good thing. And effective CPR requires a degree of skill and frankly cold intent that is hard to practice outside of repeated actual events. Given that I last worked in an Emergency Department more than 30 years ago, and last went through the practice-with-dummies certification around a dozen years ago, I myself would likely not be the best person to be next to you if you were to experience a cardiac arrest.

If you ever take, or have taken CPR training, pay attention to that first step of assessment.   It’s important.*

So, besides the imperfectly empathic personal reaction I had, this poem’s core matter is Ethna’s continued sharing of the experience of those without homes, which exceeds even my old ER experience with our un or underhoused “regulars.” Notice the subtle point Ethna weaves into this poem: she expects that Maria is severely intoxicated when she collapses, and then she concludes her memories of this person dealing with complex problems imperfectly in the telling line “I laughed at your antics weekly.” What were the antics? Maria might have had a sense of humor, that could be part of it. It’s also possible, even probable, that Maria’s human attempts to deal with the difficult state of homelessness and its context were at times comically imperfect or ineffective.**   Ethna knows this from her intimacy with Maria, just as you know it with those you have in your lives. Intimacy isn’t just the experience of joyous connection, it’s the experience of our misapprehensions too.

To hear my performance of Ethna McKiernan’s “Oh, Maria”  you can use a player gadget if you see it below, or this highlighted hyperlink which will work if you don’t see the player.

*Several decades ago a book called The House of God  by Samuel Shem was written that was like unto a modern Machiavelli’s The Prince,  only about practical hospital medical training instead of statecraft. In Shem’s book there is a list of “laws,” one of which is “At a cardiac arrest, the first procedure is to take your own pulse.”

**Dealing with homelessness either as one who has reached that state or, as McKiernan did, as someone trying to mitigate it, is much more difficult than dealing with cardiac arrest. In my couple of decades in Emergency Rooms, I’ll admit that in the course of a shift or two dealing with intractable problems and complexly impossible situations, the “break” of dealing with a crash-cart severe trauma case or a cardiac arrest with their steps of immediate choose/act instants was, strange as it might seem, a relief.