What age are we when we write poetry? What age should we be?

Poet Donald Hall while writing memoir in essay form after age 80 said that part of why he turned to prose was that after a certain age he no longer felt he had the urge to, or could, write poetry. I’m not that old yet, but after so many decades of writing poems I’m more likely to ask myself why this poem needs to exist.

This never occurred to me as a younger writer. It was enough that the urge was there, that the work of shaping it was rewarding, that the existence of some new set of words in some novel order representing a moment of experience had occurred. There are times when we may suppose this always is—at least approximately. We’re all our own first reader. For some of us, some of the time, our only readers. Even if we believe we’re writing a poem for someone else, that first audience is still inevitably connected with the poem’s creator.

I don’t know that there’s any pattern in that first audience disliking its own poem at times. Does one get better at crafting poems or observing experience with time? Does one get better at staying out of the way of the poem when that’s necessary? Does one get more preceptive at the ways the poem fails to meet, or cannot meet, some more perfect state? Does one just realize that some days you eat the bear, and other days the bear eats you?

A couple of years back I had some fun looking at a compiled list of the 20 most anthologized American poems of the modern era. Now of course such a list reflects any number of factors, some of which are extra-literary, such as prejudices, impact, and probably even some ivy-tower log-rolling. But still, these poems can safely be considered as successful with an experienced audience early in our century.

But how old were these poets in their souls of experience, the place from where they wrote these poems? It’s not unusual for younger poets to take on the air of more experienced people in their poems. This past fall we presented a couple of well-known and liked poems considered to be about old age: Rilke’s “Autumn Day”  and Shakespeare’s Sonnet 73 “Bare Ruined Choirs.”  Rilke wrote his autumn of one’s years poem in his 20s, Shakespeare’s was penned in his 30s.

Yet neither sounds false to this older reader.

Similarly, there are times when I’m writing that I feel younger than my years. It’s a commonplace that there’s a sense of play in the arts, something that past a certain age is increasingly rare to find in off-hand physical activity.

So perhaps you, like I, may feel unstuck in time when writing. Our writing may not be objectively timeless, but our mental flight seems so.

While thinking about these things this winter, I came upon this poem* that seemed to me to be a fine expression of the experience of old age experiencing the unsettledness of sense of age. 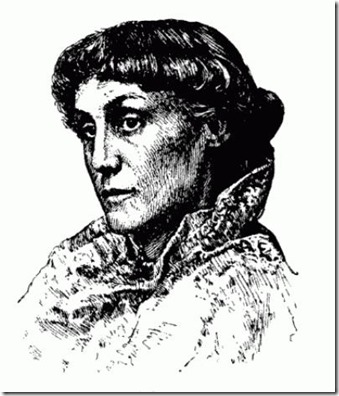 There’s not much here today about the author, American Edith M. Thomas, who published “Winter Sleep”  in 1896, when she was just in her 40s. I don’t know that much about her yet. It’s strictly metrical and all rhymed up, but once or twice it seems to strain natural speech to make its rhyme and meter.

What’s impressive about it is that it strikingly presents not just old age, but the approach of death as an unstable state, the dream of life. This isn’t an “autumn of my years” poem—it’s a “winter of my years poem.” I immediately sought to set it to music for performance. To hear what I came up with, use the player gadget below.

*”Winter Sleep”  is another poem and poet I was introduced to by Poem-A-Day from the Academy of American Poets. Here’s a link to the text of the poem and you can sign up for Poem-A-Day there too.

One thought on “Winter Sleep”