Here’s a piece using an outwardly modest poem by a modest poet, Anne Spencer. It spoke so quietly to me, that at first I overlooked it when I was reading James Weldon Johnson’s seminal “The Book of American Negro Poetry”  anthology, which included it. Just a few weeks later I saw a small story online about her exemplary life as a behind-the-scenes civil-rights activist, which mentioned that she was also a poet.

From it’s title we know she is following one of the Parlando Project mottos: “Other Peoples’ Stories.” When the poem utters its refrain “Chatterton, Shelley, Keats, and I…” that “I” is to be understood as Paul Laurence Dunbar, who was at that time a decade dead at the age of 33, but who was still the most famous Afro-American poet.

Long-time readers here have already met up with Dunbar, and Shelley and Keats require little introduction to those acquainted with English verse. That first name, Chatterton may draw a blank however.

Thomas Chatterton was the most famous failure in 19th Century English literature. A poor boy with pluck he had tricked his way into a modicum of fame by pretending to be the discoverer of a tranche of medieval poetry by a Thomas Rowley. To keep the pot boiling and to engage in the roiling politics of the day, he wrote journalism and opinion pieces under more than one pseudonym, as well as further literary works. The gig economy of his time was not kind to Chatterton. At the height of his career, he would earn about $9 in current dollars for his longer articles. In contrast, writers of our last post’s Burma Shave’s jiggles were paid over $800 in today’s money.

So how does Chatterton make it onto Anne Spencer’s words for Dunbar?

Chatterton was doing all this as a teenager. Fatherless, broke, starving, seemingly at the end of his resources, he took a fatal dose of arsenic and died in his garret. He wasn’t yet 18. 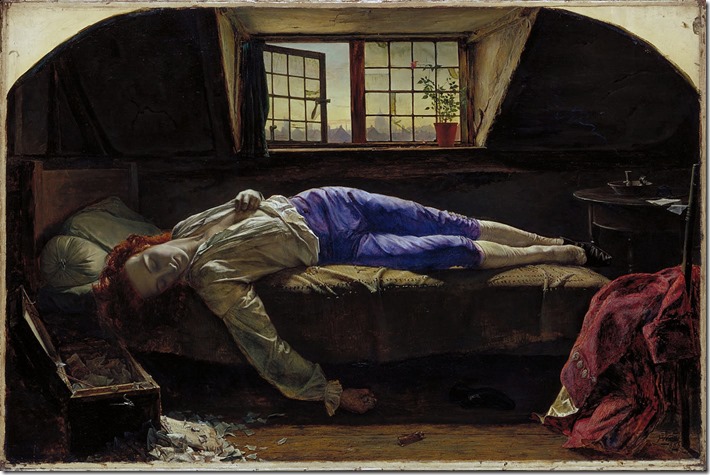 Morbid it might be, but “The Death of Chatterton” was a popular and often reproduced 19th Century painting

Given its time, social media was not blamed for his death, but political and class prejudice was.

A few decades later, the British Romantics grab on to Chatterton’s case as the perfect example of rejection of the beautiful by the unperceiving. Keats, who was himself tagged as a low-born pretender writing “Cockney poetry” in “uncouth language,” wrote a sonnet to Chatterton. The too-little-appreciated-in-his-short-life Percy Bysshe Shelley, exiled from his culture for radical political and social views, writes “Adonais,”  the now famous ode on the death of Keats at age 25. In it, Chatterton is met on a heavenly throne “Rose pale, his solemn agony had not yet faded from him” as he greets the now dead Keats/Adonais.

Note here the unperceiving in each case has something to do with politics and class prejudice.

And now we return to Anne Spencer. At age 11, the legend has it she was barely literate, six years later she was the valedictorian of her graduating class. Two years later she married and settled in Lynchburg Virginia. Eventually she wrote while raising children and working as a school librarian. In 1918, she helped found the local chapter of the NAACP. Her home became a waystop for numerous notable Afro-Americans traveling in Virginia (“Jim Crow” laws would have segregated public accommodations). James Weldon Johnson (one of the founders of the NAACP) was one of those visitors, and finding that Anne wrote poetry, he helped her work get first published in 1920. 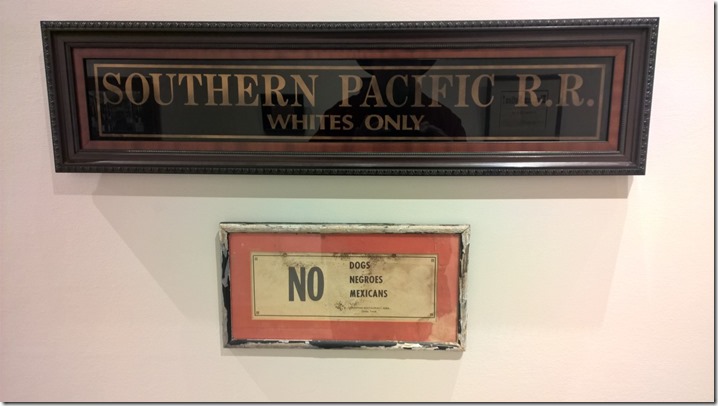 Two “Whites Only” signs from the Diane and Alan Page collection.

Homes like Spencer’s were important facilitators for Black American travel.

Spencer was nearly 40 years old before that first publication. Clearly not the live fast/die young sort. In 1922 when Johnson published the first ever anthology of Afro-American verse, Spencer was included, along with the obvious choice of Dunbar himself. Concluding his introduction to that collection, Johnson said of Spencer’s verse that she was “The most modern and least obvious in her methods.”

“Dunbar”  demonstrates that. Shelley’s “Adonais”  is hundreds of lines. Spencer’s “Dunbar”  is five. Shelley will tell it, repeating and restating his theme in stanza by stanza of glorious English Romantic verse. Spencer’s “Dunbar”  sits quietly, in the midst of this history of poets who died young, whose voices were muffled by prejudice before they were stilled by death. It’s just one chorus. She groups them, tells us Paul Laurence Dunbar found himself with them, a statement of quiet, powerful, assertion.

Perhaps you need to know this history to appreciate the power of that, that “Chatterton, Shelley, Keats, and I” isn’t some arbitrary listing, a line that happens in a small poem talking about a poet—but it’s good to know history, it’s good to have a Black History month, it’s good to know that Keats and Shelley, who now are hallowed in our textbooks, weren’t greeted as worthy poets by their times. It’s good to know that one woman around a hundred years ago in segregated Virginia, quietly but eloquently wrote, and steadfastly worked, to assert a different world.

To hear my performance of Anne Spencer’s “Dunbar,”  use the player below. Don’t see a player? This highlighted hyperlink will also play it.