We’re approaching the halfway point in the Parlando Project’s first year, and my plans for 2017 are to feature more 21st century words, when and if I can get permission from publishers/authors to use them here. Today’s audio piece features words from the first “external” 21st Century author to be used here: Philip Dacey.

This year has been much commented upon for the death of musician/lyric writers, two great cultural stylists and movers, David Bowie and Prince, foremost among them.  It would be careless to extend the list of 2016’s lost musician/poets for fear of who would drop off the bottom for reasons of length. After all, Merle Haggard or Phife Dog or Greg Lake mean as much or more to some listeners as Prince or Bowie. For me personally, two Fall 2016 musician/poet deaths hit me with specific force: Leonard Cohen and Mose Allison. You might have guessed that, for this is the place “Where Music and Words Meet”—though both are better composers than generally realized, both Cohen and Allison were known for their lyrics. 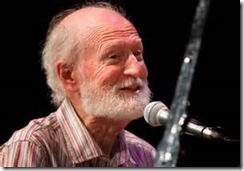 A Cohen and a Mose

But that’s not exactly why. You see Mose Allison and Leonard Cohen shared a writing sensibility that I particularly prize: they’re funny as hell. “Funny as hell”—not as merely the common idiom— “Funny as hell,” in that both saw clearly the fallen human limitations and made us laugh at it. Laughter can be a good teacher, and as the profoundly comic blues sensibility tries to teach us, even what we can’t learn or think our way out of can be better endured knowing that it’s not right, that it’s incongruous, illogical, unexpected—in other words, that it’s funny.

The importance of our musician/poets may be falling in the 21st Century, though the speed of that decent is hard to judge, as we, their human society, are falling too. And if we look below we see the poets of the past: Dickinson, Whitman, Keats, Blake, Frost, Sandburg, Yeats, Eluard and all their heavenly host, and Shakespeare, Sapho, Basho, Homer, Li Bai, and many more that we cannot name and have never heard. We are falling toward all of them.

And Philip Dacey falls with us, and he smiles “Look, we are all falling.”

Dacey too is funny as hell. So if you are coming to this podcast from a musician/poet listenership, you could think of Philip Dacey as a Midwestern Leonard Cohen without all the sackcloth and ashes; or that Dacey is Mose Allison without the constantly modulating piano. And there’s another difference: Dacey’s poems find forgiveness more consistently and honestly than Cohen or Allison, or most any other writer.

We are all falling, and Philip Dacey falls with us, and he says “I’ll bet there is an end to this fall, but who knows?”

It’s not a coincidence that I put my remembrance of Philip Dacey as one of the first Parlando posts, because when I heard that Phil had died I was working on gathering, performing, and producing material for the Parlando Project. I’m grateful for the permission to present the LYL Band performing my reading of this poem of Phil’s. If you like this, you may want to seek out one of Philip Dacey’s books or read more about him online at the philipdacey.com web site. If you’d like a taste of how Phillip Dacey presented his poems, there is a 30-minute video of a late reading by him here.

To hear the LYL Band perform Butterly: Upon Mistyping Butterfly, click on the gadget you’ll see below.

One thought on “Butterly”