I refer to it less, but this ongoing Parlando Project actually causes me to spend more time with music—composing, playing, recording, and mixing it—than with the words. The words, of course, are mostly poetry, as condensed expression is so often found there mixed with musical devices in word form.

I’m not alone in thinking there’s a natural connection there. Perhaps that’s why you’re reading this, rather than a blog on cinema, graphic novels, or the interesting things I did last night. From what comments I get, the words, mostly poetry, are the larger draw and concern—or it may be that it’s easier to talk about words and their potential messages than it is about music.

But speaking now of America and the English-speaking musical world, what if it largely functioned in this manner…. Insert woozy musical cue here indicating we’ve moved away from our mundane current world into some speculative alternate reality as a new voice takes over this blog:

Music is a sublime art, which alas is much ignored and misunderstood by most people. Oh yes, there are occasional times when folks seem to pay some attention to what they think is music, but in fact it’s not really music they are listening to. For someone younger than I, it seems it’s always been so. How did this happen?

In my youth there were people who listened to a highly commercial aggregation of “musicians” who went under the name “The Beatles.” In their unsophisticated way The Beatles would bash away for a couple of minutes, never showing the development and dynamic range of actual music, and then they’d publish their “songs” on recordings that would be played on abysmal “record players” that were aptly named because they could only spin the vinyl record at something approximating the correct speed and could only transduce the rude noise to an even cruder racket. The Beatles, to be honest, weren’t the worst of those “pop musicians”—they were Stravinsky compared to some others in their field—clearly actual musical quality was beside the point.

Perhaps I shouldn’t object too much now to this commercial enterprise once undertaken by those naive or craven young men back in the 1960s, but what happened next was worse. Some actual musicians and musical critics started to give them big heads, and as a result, even worse crimes were committed. Throwing aside centuries of established artistic criteria, these commercial appeasers called what The Beatles and “pop musicians” were doing music. They would search for even a hint of actual compositional intent or accomplishment in these works, and praise them if they could pretend they found it.

Soon, The Beatles started to tack on elements used by actual musicians in their recordings. It was all transparently fake, and perhaps I should find it strange that even audiences ignorant of what real music is and can accomplish allowed it was art rather than pathetic pretense. And so, they presented recordings with string quartets, when none of them knew so much as which side of the bow to apply to the strings. They made fraudulent representations of actual music, using paid studio technicians who modified their feeble attempts at playing music so that they sounded profound to those “listeners” who didn’t know any better.

And now as I survey what could otherwise be our musical landscape and see young people who “listen” to what they “think” is “music” while playing their “video games”, dancing their interminable “dancing,” “streaming” it on their “phones” ( that they actually don’t use to make phone calls on), while “Tweeting” and “Instagraming” with tiny screen keyboards that make it hard to enclose every other word with quote-marks like an intelligent person.

I said I should be surprised. I take that back. In a world that has given us Donald Trump and Brexit and inconsistent intra-city train service, we cannot count on most people to have an authentic understanding of what they’re missing when they call such things music. 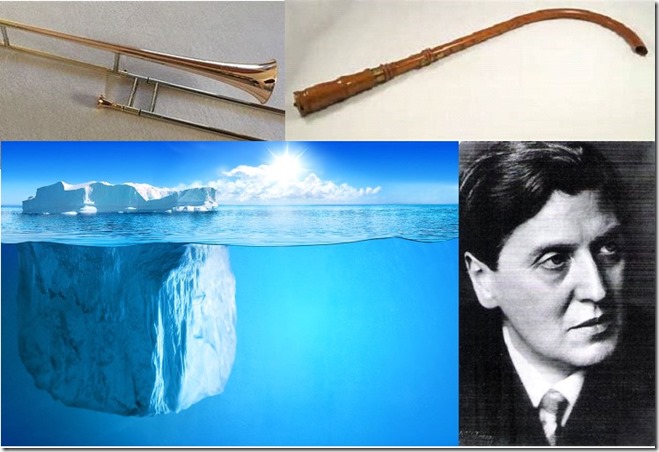 But let us, the intelligent critics who understand art and its important criteria, acknowledge the consequences of this commercial folly. Now we have people claiming to be musicians who do not play instruments, save perhaps for something called a synthesizer (a name like something from Aldous Huxley), a sequencer (gene therapy?), or drum machines (oh, such industrial nomenclature invades art in our year of Ford). They don’t know that 7/8ths of an Alban Berg is invisible, they can’t tell their krummhorn from their sackbut. When asked to defend this false and phony “art,” audiences say they “enjoy” it.

Since when did enjoyment have anything to do with the sublime art of music?

Reprise that spooky musical cue that says we now return to our real world, and to Parlando – Where Music and Words Meet. Yes, our real world has musical snobs and exclusive musical passions, but in general, those haven’t harmed the ubiquity of music in our culture. Yes, musicians who produce music that challenges your expectations, usually have a harder time finding an audience, but a broad-based, vibrant musical culture has always allowed some of them to sneak in to a wider listenership, not prevented it. And musicians tend to be sensualists more than aesthetic puritans.

What can poets and literary critics learn from musicians?

(As to the title and occasion for this satire, an article has caused some discussion lately in poetry circles.)

I promised last time that we’d move on from Emily Dickinson’s church of the August crickets to another take on something like the same thing. Dickinson’s words are set in the afternoon, but this one, “August Moonlight” moves on to August nighttime.

I knew nothing of this poem’s author, Richard Le Gallienne, before I found these words looking for some material on the end of summer. I still know little about him. He’s from Liverpool England, but his lifetime only overlapped the Beatles a little at the end, and besides he’d moved to France by then. In his youth he wrote for The Yellow Book, a short-lived but influential periodical of the ‘90s. No, not the grunge ‘90s, though the thought of Husker Du, Nirvana, or The Replacements being drawn by Aubrey Beardsley (the Yellow Book’s art editor) gives me pause to think. No the 1890s, the “yellow decade,” when using art to throw light on difference, and difference to throw light on art was all the rage.

I’ve always loved the visual art associated with The Yellow Book and the circles surrounding it, but frankly, I’m not a big fan of most of the writers associated with that movement. There’s a kind of dead-end romanticism about a lot of it. Even in my youth, when such things might have been attractive to me, the writers, taken as a group, seemed stilted, like it was a paint-by-numbers picture of a Keats poem.

The visual art however gets past any of that, because it’s just so beautiful in line and color. 70 years afterward, the art of The Yellow Book circle was one of the chief influences on San Francisco rock poster art. So I could have thrown Le Gallienne’s words in with my take on a slinky Grateful Dead space jam or maybe some Beatley folk-rock. I did neither. Instead I paired it with the night-time side of the Velvet Underground, the representative New York City rock group of the 60s.

While I’m at it: Grateful Dead, The Velvet Underground. They’re supposed to be in complete opposition. Sonically there is a bit of a gap there, I’ll admit, though nothing that music couldn’t bridge. But nothing alike? Each band is fronted by a guitarist who has a problem with heroin. The bass player (and sometimes the keyboard player) is really an avant-garde classical composer. They both start out playing to dancers swimming in colored lights at events heavily associated with and promoted by a non-musician guru. Both bands had trouble selling records, at least at first, but those who did find them started forming bands beloved by cliques of college students. Both bands are known for an un-compromising poet maudit stance. Of course, one band hangs out with gangsters leading to a well-publicized incident of an audience member getting killed at a show. One wanted to call to call an album “Skull F**k.” One band put a drug kingpin in charge of its sound system. The other band hung out a lot with artists in lofts and had girl-germs for letting a woman be their drummer.

Seriously folks, I kid. I think it was John Keats who said that great artists must be capable of liking both the Grateful Dead and the Velvet Underground. He called it Negative Capability. Coleridge was always reminding him of that whenever Keats couldn’t clamp onto a good ground when trying to jump-start Coleridge’s rusty Borgward sedan.

Alas I’ve run out of time. You could have been reading “William Morris and Andy Warhol, pretty much the same thing.” Feel free to use the rest of your time listening to “August Moonlight” as Richard Le Gallienne thinks about what it all means out behind the barn. The gadget to play it should be right below this. And you know, that rhythm guitar part might have been a little influenced by the Beatles “Rain…”