My teenaged son is proud of his mastery of modern youth slang and enjoys the idea that his parents and their generations will have no idea what such terms mean. This is of course part of the utility of language: it not only binds people together, it keeps them apart.*

No matter, new times and new experiences enjoy making fresh and untarnished words to describe them. Words must have their pleasures, even when we don’t quite understand everything someone is saying. Take Thomas Hardy, a man who wrote what may be one of the last poems written in the 19th Century, after he had spent 61 years in it. Published on or around New Year’s Eve in 1900, today’s piece is “The Darkling Thrush.”  In Hardy’s poem, as an old man looks at the changing of a year and century, we have the reverse of my son’s joy: old words from an old man. 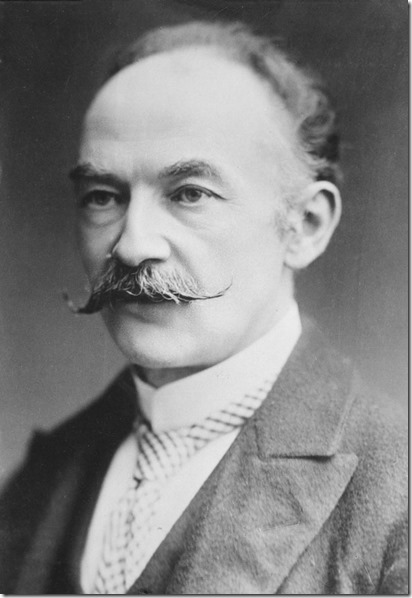 “Darkling”, “coppice”, “spectre”, “bine-stems”, “lyres”, “outleant”, “illimited”—we meet the first one in the title, the second five words in, the third at ten words. Even if I was to quiz educated Americans, I doubt most could define the majority of these words, and I’m unsure how much better modern British residents would do.**

Coppicing is a European method of managing tree growth, in which mature trees are cut off to allow fresh shoots to continually propagate. Spectre is more known now as a trademark applied to laptops and James Bond bad-guys, but is an English word for a spirit or ghost. Bines are not vines to the knowledgeable horticulturist (bines twist their main stem around things to tangle and climb, vines use special parts of branches to hitch themselves up). Lyres are not supporters of disreputable political movements, but a stringed harp. Illimited is just another, rarer, form of the word unlimited, and I think Hardy may have chosen it because it starts with a sick word, ill, but also puns on illuminated. The titled adjective, darkling is a handy way to say it’s occurring in the dark. Although it’s a little-used word, like illimited, the sound of it brings to mind something else, the smallness of the title bird, as in duckling,  and darkling’s sound also lets us see dusk rather than deep night, when we can still see the winter thicket Hardy sets his poem in.

But outleant is the real mystery word. A short web search finds no online dictionary definitions, no examples of its use other than in Hardy’s poem. A simple deconstruction of the word’s parts would make it, inverted, saying “leaning out.” And that’s what it probably means. There’s textural evidence as it ties back to the poem’s second word, “leant upon the gate” to the coppice. Yet, did Hardy intend to infer two other close words in this word’s sound? Out-lent, a sense that the haunted and dreary winter scene of the poem is owned by the old, dying century and is lent out only to the present? Depending on pronunciation of the printed word’s “ea,” it could conceivably be pronounced out-lent (and Hardy does rhyme it with “lament.”) Does he also want us to hear a closeness to outlearnt, and that the old century’s corpus of belief has been superseded (by newer scientific discoveries?) That would be consistent with Hardy’s beliefs.

Perhaps this is my weakness as a reader, translator, performer and poet myself. If I sense an image is possible, I want to see it, hear it, perform it. Bare winter bines twisted around a copse of brush wood as a corpse leaning out of a coffin may be grisly, but it’s not to me a strong image.*** Even if it’s abstract, the second sense, that of this bare and haunted landscape being the cemetery plot owned by the old century of which we are only visiting seems stronger. For others, the sense that new knowledge has killed off the old beliefs (outlearnt) could be a choice. I can’t know that Hardy intended this ambiguity by choosing this unusual word outleant, but I, the reader, put it there.

The title calls attention to the central image, yet another messenger bird in British poetry, to go with the nightingales and skylarks of Keats and Shelley, poets of Hardy’s now dying century. I like that Hardy lets us see the bird, and it’s frail, gaunt, and -ling tiny, and that we can see feathers fluffed to best insulate its frame, which the wind is disputing.

So, there was Hardy, around New Year’s Eve, using his old and odd words at the end of an old century. For us, Hardy’s oncoming one (the 20th century) has now closed itself. Will things get better or worse in our new year? Something in us wants to foretell at every ending—yet even looking backwards, we have trouble making a simple better or worse judgement. Here, the battered bird, the darkling thrush, says better. Hardy says he knows he doesn’t know.

He knows he doesn’t know is the realist’s version of hope.

Anyway, one of the joys of combining poetry with music is that you don’t have to take a test on the words to enjoy the piece. My pompatus of a performance of Thomas Hardy’s “The Darkling Thrush”  is available with the player below.

*Right now he’s very generous in this however. He wants me to know these words so I won’t be left out.

**Before looking them up, I knew spectre and lyres for sure and I was fairly sure about darkling as an adverb, then taken to adjective. I had ideas (some from context) on the others—and in the case of coppice, my ideas were wrong. My son knew spectre and lyres and defined darkling as “a creature of the night” for which I’ll give half-credit. In the case of bines, I told him I learned how bines were different from vines, and he told me “Sure they are! Vines are 7 second videos.” (That last was a joke on his part.) My wife, a fine word-smith, also got 2.5 (“Bines, it that like a wood-bine?” got half-credit as understanding was there, even if a good dictionary definition it wasn’t.)

***Saplings and bines and “sharp landscape” would indicate a skeletal image is intended, but bare bones are not particularly scary or intense compared to rot and decomposition, much less animated brains-hungry undead. Hardy doesn’t mean scary so much as long-dead I guess. Interestingly, Hardy had a direct graveyard experience to draw on here.