Let’s just name the winner right off, and kill the suspense: Wallace Stevens’ “To the Roaring Wind.”

There was a time in my teens and twenties when Wallace Stevens grabbed ahold of me. I think back at that young man and try to wonder why. Well there was the accident of a very affordable collection of his best work that I mentioned when I first posted “To the Roaring Wind”  back in early January. I think that I also liked the way his poems looked. Free verse looked right on the page to me as well to my ear—I was not writing metrical, rhymed poetry when I started—but the poems also looked ordered, focused, a tightly built thing. E. E. Cummings or Marianne Moore with their ragged lines and strange fragmentation looked like that they were confused about how to put things into words, where Stevens looked sure. Other favorites that came to me later in life, like Frost and Dickinson, seemed to my younger self all too pat and superficial then, and there was Stevens, his poems with majestic numerabled sections that seemed to be laying out a lawyerish or legislative structure filled in with an exact poet’s eye. 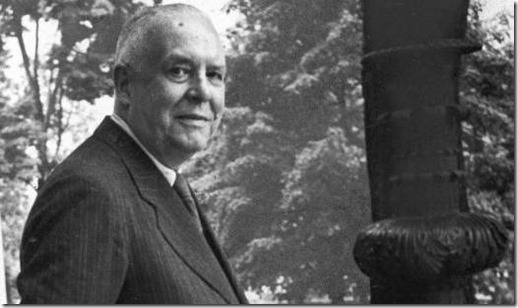 That I didn’t understand all that he was getting at in his poems wasn’t a problem. No, that was a benefit. For my paperback edition $1.45 I got work that one could re-read without knowing already how it would come out! I recall writing poems that I didn’t know how they would come out either, something I will still do. There was one longer one from that era, the first one of mine ever to be published.  It had Stevens’ influence all over it,  copying his Blackbirds-numbered sections.

Frost, who I thought was entirely too conventional then, claimed that he never liked Stevens’ work “Because it purports to make me think.”  Isn’t that line so Frost-ian? First you might high-five Frost and shout “burn!” And then, if you pause and think about it, in decrying Stevens Frost makes a good argument for why you might want to read him—indeed, why I wanted to read him.

Oddly, this poet who was attractive to this teenager, published his first collection Harmonium when he was 44 years old. Lewis Untermeyer, one of the canon-gatekeepers of Stevens’ time, reviewed it then:

“…lacking the spell of any emotion, Harmonium  loses both itself and its audience. It has much for the eye, something for the ear, but nothing for that central hunger which is at the heart of all the senses.”

Untermeyer and Frost may have been right to some degree. I fell away from Stevens as I aged, not from any conscious choice, but because I had other poetic worlds to explore, ones that often had emotional and visionary aspects that weren’t overt in Stevens work.

Here is where the Parlando Project, which performs the poems with music, comes in. There is no inherent emotional content in any series of notes stronger than what the musician manifests when they perform it.

As I noted that Harmonium,  as a work published in 1923. was now in the public domain as of the first of January 2019, I looked for a piece from it that wasn’t one of its “greatest hits,” a deep cut to represent the collection itself rather than an often anthologized and well-known poem. My attention fell on the last piece in the book, this one. As I did this, a connection emerged with a local poet and poetry-reading organizer, David Shove who I learned had died at the turn of the year. “To the Roaring Wind”  is a call to two things: to the muse, that time-honored concept that what supplies us as artists isn’t from our individual merits, but from things outside us that we must serve, and then, to speaking poetry aloud.