When I look at a more well-known poet or poem, I often find someone else less well-remembered connected with them. This sort of thing naturally intrigues me. Are we overlooking something of interest? Does this lesser-known person change our understanding of the more well-known poet?

I’ve noted earlier this month that Carl Sandburg won the Pulitzer Prize for his 1918 collection Cornhuskers—but that’s not the full story. For some reason, they decided to give out two awards for poetry that year, and another poet’s 1918 work was the co-recipient: Margaret Widdemer’s Old Road to Paradise.

I don’t aim this project to literary scholars, who likely know more than I do about the poets whose words I use, but there are indications that Widdemer’s name would stump them too, even those whose field includes the Modernist era. From a look through Widdemer’s Old Road to Paradise  this can be partly ascribed to Widdemer not writing in the Modernist style that triumphed as the century continued. Furthermore, Widdemer’s outlook, though feminist, is middle-class and lacks the bohemian allure of Millay or even Sara Teasdale (the poetry winner the previous year). As time passes, rebels and poètes maudite often retain their outsider excitement while losing their air of present danger, and Widdemer offers none of that. And while I’m hesitant to judge from a skim through one book, a further issue is that she may not be very good.

Widdemer also had a successful career as a popular novelist between the wars.

Particularly for me, and for the Parlando Project, Millay and Teasdale’s words just want to sing off the page. Widdemer’s, though rhymed and following metrical schemes, generally don’t. There is a flatness to subject matter and a conventionality of imagery that fails to grab me as well. I would have loved to have picked up Old Road to Paradise  and found something as interesting as Fenton Johnson, Edward Thomas, or Anne Spencer; but not this time. 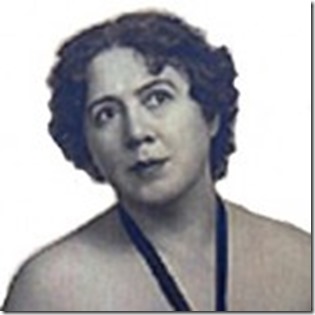 That doesn’t mean there’s nothing there. Widdemer seems a level-headed person, and she is writing from a woman’s point of view that has fewer representations in the literary cannon of her era. What little I know of her biography says she worked to advance poetry and literary efforts. Could I find something to use? As I paged through Old Road to Paradise   I marked “When I Was a Young Girl”  as a possibility.

Why did this one stand out? It seems based on a folk song, but while it takes lines and tropes from folk songs, it presents an alternative viewpoint to the songs it borrows from. Since the post-WWII folk song revival, folk song has been even further associated with bohemianism and adventuresome living, even though the traditional texts used most often tell of sad ends.

From its title and often refrained first line, the folk song we can most easily connect with Widdemer’s poem is the female version of “The Unfortunate Rake”  a 17th Century song with dozens of popular folk song variations, including the American cowboy song “The Streets of Laredo.”  With the “When I Was a Young Girl”  title it’s been sung by Feist and Marlon Williams, and back in the 20th Century by Julie Driscoll and Nina Simone. The general plot of these variations is that a young person is dying after a short, intense life of drink and venereal disease. The too short life of pleasure is valorized even if the song’s singer often remarks that they know they are doomed to hell. No wonder this song has remained popular—both sinners and saints, and listeners on a journey from either pole to the other, can find something in the tale!

Widdemer starts as some of these folk songs do, by telling of the excitement of their youth before the song’s present moment, though in her more circumspect telling, the young girl’s adventures are in daydreams and fantasies, including (in another folk song reference), a longing to run off with the “raggle-taggle gypsies.”

I used a minor key melody for this, not unlike that used in the folk song. I won’t spoil the ending Widdemer puts on her version of this story by foretelling it here, but it’s not where that folk song and its variations take you. To hear it, use the player below.

2 thoughts on “When I Was a Young Girl”