Here in the upper Midwest we are now in the middle of winter, and so are in a various ambivalence about it. Part of us doesn’t like the burden of winter, part of us wants to taunt it, and show that we can still have the upper hand over it, and some of us, those who don’t want to stop reading the book of nature, can find a cold, white chapter to puzzle over and admire.

I’ve already spoken here about how Minneapolis was settled as something of a colonial outpost of New England. The author of the words for this episode, Emily Dickinson was a lifelong New Englander, steeped in Transcendentalist thought, so we know she’s read that Winter chapter.

Just before dawn this morning, I jumped on my winter bicycle and took a ride to my favorite breakfast café.  It was seasonable, 20 degrees Fahrenheit and snowing, the streetlight globes surrounded with particulate halos of pelting snow. My tires were crunching the snow, the big knobs of their tread like typewriter keys imprinting the blank pavement’s page. It really was quite beautiful, if obscure of meaning. Summer rain saturates us, inebriates us. Snow surrounds us, but we are never more than a transient part of it, unable to understand its dance. 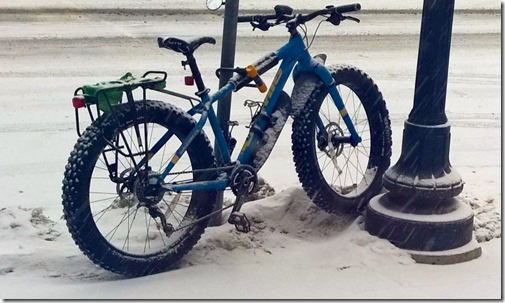 Winter is good – his Hoar Delights!  Also, there is tea and a frittata involved.

Emily Dickinson’s words are featured here a lot because she’s a great lyric poet and her words fit with music almost without effort. I learned decades ago that Dickinson favored “hymn meter,” that 8,6,8,6 syllable verse that makes much of Dickinson singable to the melodies of “Amazing Grace” or the “Gilligan’s Island” theme song. For “Winter is Good” I decided to throw out that pattern, turning some lines into refrains and marrying it to a melody similar to the Christmas carol “Joy To the World” instead.

Dickinson’s second verse is a doozy. Just 17 words in her text, but it twists so wildly. “Generic as a Quarry”—there’s winter’s white page I suppose. “And hearty – as a Rose-“ not sure where we go there. Dickinson was an avid gardener, and she no doubt missed her summer plants, but my best guess is just rosy cheeks.  And finally, the concluding two lines “Invited with asperity/But welcome when he goes.” A jokey finish that seems like it’s singing the old joke about the pleasure of hitting oneself on the head with a hammer because it feels so good when you stop.

Our various ambivalence aside, that’s what the Winter chapter in the book of nature says to us Northerners, our words arise and are recovered over by the white page; our music only the spaces between silence, soon to be drifted in.

To hear the LYL Band play this hymn to winter with words by Emily Dickinson, click on the gadget below.