It may be U. S. National Poetry Month, but one can’t deny the impact that English poets have had on poetry, particularly before the Modernists launched with significant American participation.

Modernism, as practiced by those early 20th Century Imagists sought to cleanse poetry of the rust and rot of “poetic language” and rote abstract metaphors. Strong, exact words, no more complex or numerous than necessary were to describe things that were actual things, not merely decorative analogies to describe something else. By the 1920s, that American import, T. S. Eliot, became the standard of one large stream of Modernism. Although inspired by this fresh use of language, the Eliot wing of Modernism sought to rid poetry of “romanticism,” defined as a relentlessly subjective expression of personal experience unshaped by a greater historical and cultural understanding. Poetic language might be refreshed, but the cult of the great poem returned, and said that poetry is best to be in service of great themes and elaborate—rather than elegant—structures of thought.

Early Imagist/Modernist poems were about moments. The High Modernism of Eliot allowed it to be about eras. Imagists prized images of things formerly ignored or costumed only in the rhetorical finery in 19th Century poetry. High Modernism still allowed the mundane to stand for sublime thoughts, but it often sought to display a level of knowledge and literary scholarship along with the everyday in its choice of images.

This is why it’s important to look at the early part of artistic movements. Often their best ideas become mutated as the movements develop. Their revolutions become the new orthodoxy.

Today’s piece, “I Wandered Lonely as a Cloud (Daffodils)”  is by English poet William Wordsworth, one of the founders of Romanticism. It’s a poem that can be attached to an exact (April, Poetry Month) date: April 15th, 1802, and to a walk that Wordsworth and his sister took in rural England. But that’s not how the poem was written. Wordsworth wrote it a couple of years later. He referred to his sister’s detailed journal entry about the April walk to refresh his particulars. His wife supplied two critical lines for the final stanza. This was not a spontaneous outburst of subjective personal feeling at all. 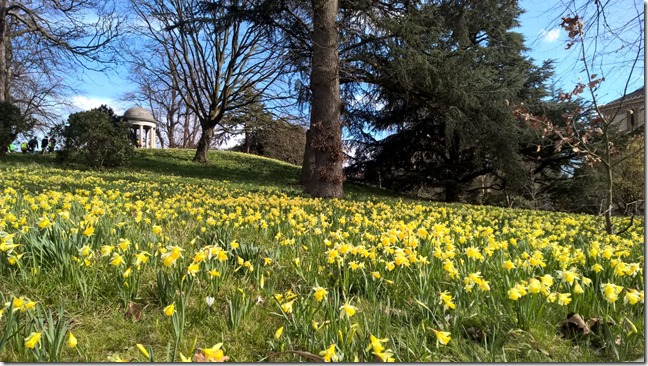 I couldn’t make it to the Lake District, but even a month ago, daffodils were blooming during an English Spring in Kew Gardens

In a few weeks my lawn will look like this in Minnesota—only dandelions, not daffodils.

When I performed the version you’ll hear below, I made one significant change and one minor one. The minor change? I dropped the adjective golden from his line “A host, of golden daffodils.” I suspect I did this by accident as I performed it. Not to dis Wordsworth (and by the way, Billy, what’s with that obvious pen name “Words-worth” for your poetry gig?) but I think I improved the line when I sung it as “A host, a host of daffodils.” First off, daffodils are a common flower, and they are in the wild always yellow. Strict Imagists would say the golden adjective is therefore unnecessary—and it is, well, a gilding of the lily. I can’t recall my reason for the major change, dropping the next to last stanza—I may have desired to shorten the piece for performance—but it is the weakest stanza in the poem.

The resulting “Daffodils”  I perform wouldn’t have been far from what F. S. Flint or Richard Aldington would have written a century or more later as pioneering Modernists. After all, Wordsworth said that he was trying to cleanse English poetry from special, high-flown, poetic diction too, to return it to “as far as is possible, a selection of the language really spoken by men.”

I do retain something else Wordsworth does here, something I don’t recall the Imagists doing much. “Daffodils”  is presented in a framing device, while the Imagists were all about the presentation of immediacy. Wordsworth doesn’t say merely that looking at all these wildflowers, the temporary exultation of spring, was transfixing—and he says that less with that next-to-last stanza removed. This is not a poem only about letting us see them in their wild, external multitude through his eye on an April walk in nature.

No, the poem starts, deliberately, in past tense. “I wandered lonely as a cloud.” And the poem closes even more removed. The speaker of the poem is not the energetic nature-walker strolling in Spring. In the actual, unknown, later time of the poem, he’s lying on a daybed, vacant or pensive. These daffodils are now only obtainable by the “inward eye” of recollection.

Setting something in the past can be seen as a tactic of sentimentality, something the Modernists distained, but what we have here is worth that risk. How so?

I thought it a delightful little nature poem when I read it as a teenager. Then I read it decades later, as my Eagle Scout father, the angler long accustomed to waiting perpendicular on the flat surface of lakes, the man who had bicycled across his rural state many times—while then, as I re-read, he was further and further confined to lying flat in rooms with the erasing of days. In that later time, noting the wild daffodils bliss is told to us in memory, I reversed Wordsworth’s famous dictum on the origin of poetry. In my reading, in that time, it became a poem, a song, of tranquility recollected in emotion.

Here’s my performance of “Daffodils”  as I sang and accompanied it on acoustic guitar.

September 17th is the birthday of the American Modernist poet and physician William Carlos Williams, and today’s piece uses the words from one of his poems “It Is a Small Plant,”  the best known selection from a sequence of poems Williams called “The Flowers of August.” 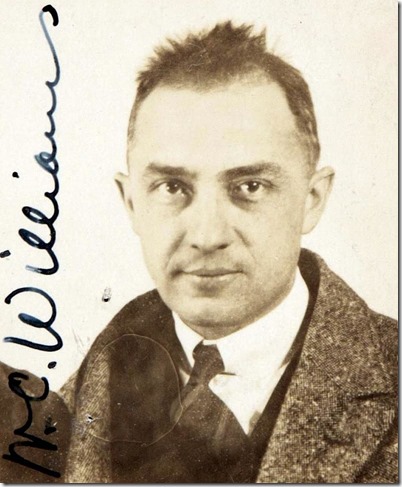 Just because you have have a passport doesn’t mean you have to move overseas.

Unlike some other American Modernists—including two poets he met and befriended while a student at the University of Pennsylvania, H.D. and Ezra Pound—Williams spent most of his formative writing years in the United States, much of it in his native state of New Jersey where he practiced as a pediatrician. Like his fellow stay-at-home Modernist Carl Sandburg, Williams wrote poems the followed the new Imagist rules, at least at the start, finding them useful in breaking away from the old poetic styles.

One of those Imagist rules, the first one in fact, was “direct treatment of the ‘thing.” That doesn’t mean that you just directly state the message from your heart. Rather, it means that you honor and hone the image(s) that represent your meaning as palpable thing, not as mere poetic decoration for your words. “It Is a Small Plant” demonstrates that by spending nearly the entire poem presenting a description of a flowering plant.

In the series “The Flowers of August,”  each of Williams’ other poems are titled with the name of a particular meadow or pasture flower, but not this one. So, I suspect this is meaningful. The description of the flower here sounds a bit to me like the common bluebell, but it’s possible that he diverged from botany in service of one of the poem’s images, or that the omission of the flower name in the title for this poem made a point for him.

The other, more important, mystery is who the “her” that is inspecting the flower with the poet is, the her who regards the subject flower as “a little plant without leaves.” At first. I wondered if it was perhaps a young girl looking at the flowers, but I now believe that it’s the “her” featured at the poem’s close: summer. If that’s so, that is the reason the flower has no name, as the human name doesn’t exist for nature and for nature’s incarnation as summer. And in the course of the poem, summer then too cannot care about the anthropomorphic desires presented in Williams’ presentation of the image of the flower. 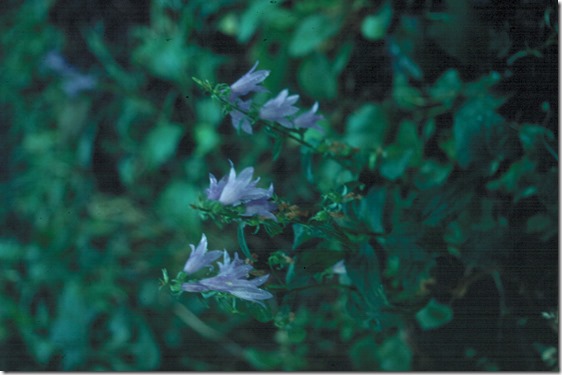 but he did see nature observing himself observing the flower.

I’m not a quick understander of poetry. In working on this piece, I read Williams’ poem, enjoying some lines in themselves. The ostensible subject seemed to fit with the season and coincidentally with some other pieces I’m working on—but I wasn’t sure what it meant. In the course of fitting it with music, recording the vocal, and then tweaking and mixing the music, I lived with this poem for a good part of the last couple of days, reading or hearing the words over and over.

If I had been too concerned with its meaning, I might have stuck with my initial supposition, that it was child apprehending the flower. I was pre-disposed to that on first reading, having briefly re-meeting Margot Kreil earlier this week, a poet who wrote an excellent poem called “Weeds”  which featured just such an image. But I was more concerned with getting the drums right, playing the bass, setting up delay divisions for the guitar lines, and marshalling my limited keyboard skills for the soft keyboard parts, and then making that all fit together.

Through you don’t have to go through those composition and production steps, this points out again one of the things that music can do to change the context for words when it’s combined with them. While music can emphasize some mood or presentation of the words, in the same way that suspense music makes a film clip of a character walking down an unremarkable hallway scary, it can also offer its art as a distraction from worrying about meaning too soon with a poem.

To hear my performance of William Carlos Williams’ “It Is a Small Plant,”  use the player below.