Here’s a hopeful song written by a worried man during the great trauma of the American Civil War.

Those who’ve followed along on this blog in 2018 will know that I’ve performed several pieces with words written by that man, poet Henry Wadsworth Longfellow. I’ve written about his once great fame and his steep fall from poetic fashion, but I’ve written little about his eventful personal life. 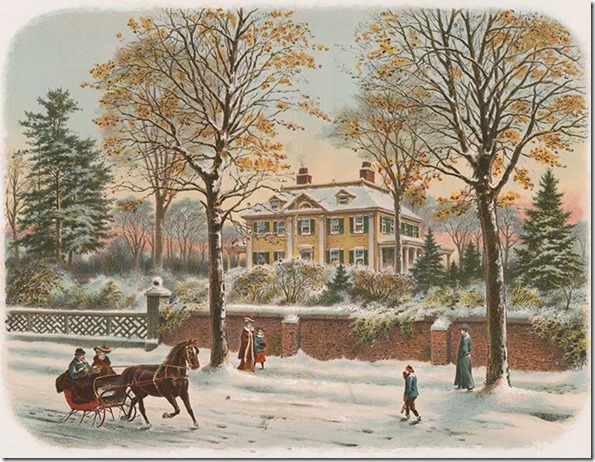 Not all of what it seems: a picture postcard scene of Longfellow’s home during the Civil War.

When the American Civil War broke out in 1861, there could be no doubt on which side Longfellow would be on. To the extent that Longfellow was political as a writer, he was resolutely against the institution of slavery. Longfellow was also philosophically a pacifist, but even before the war he was aware of the cost Abolitionist convictions could bring. His closest friend, Charles Sumner, a U. S. Senator and another Abolitionist, was sitting at his desk on the Senate floor in 1856 when three southern congressmen launched a planned assault on him. The leader of the crew beat Sumner into unconsciousness with a walking stick, while the other two held off any who rose to try to stop the assault, one brandishing a pistol to keep help at bay. Sumner was so badly injured from the attack he was unable to resume his Senate duties for three years after the attack.

By the spring of 1863, the Civil War over the maintenance of slavery was now two years old. No one knew how long it would continue or what the outcome would be, and once more someone close to Longfellow would feel its blows. Longfellow’s 17-year-old son Charley, who had firmly resolved his own feelings about the war, snuck out of the family home and made his way to Washington to join the Union army. In November of that year, his unit was reconnoitering around a Virginia location called New Hope Church. They found what they were looking for. A southern bullet ripped through Charley Longfellow’s torso sideways, just nicking his spine. Luck that, and luck that he was able to endure and survive a painful evacuation on a wagon and the woeful state of battlefield trauma care in his time. Over half-a-million fellow soldiers didn’t.

So, a month before Christmas, Henry Wadsworth Longfellow was searching the maze of makeshift hospitals and camps in Washington until he found his wounded son. Son found, by Christmas the Longfellows could return home for further recuperation.

Today “I Heard the Bells on Christmas Day”*  if listened to casually may pass as just another carol, an obligatory musical evocation of some cheerful pealing on a winter’s holiday. But to the poet who wrote these words that Christmas, and to the nation torn apart, that he and his audience were part of, this was not merely another generalized Christmas card.

I wrote a couple of hundred words, meaning to put them here next, starting to say, preaching about, what Longfellow said in his poem—but Longfellow says what he needed to say pretty well and clear for an unfashionable poet. Maybe that “clear” thing is part of what is unfashionable, but despair shared and hope earnestly put forward is  a gift.

The player gadget below will let you hear “I Heard the Bells on Christmas Day (Christmas Bells)”  as I performed it. To sharpen Longfellow’s point, I trimmed back the number of stanzas in his original poem and then again from the shorter number of verses usually sung in the hymn that was made from it. I also reharmonized the chord changes a little. Guitarists wanting to play this themselves can use this shared link to see the details of the open tuning and chord voicings I used for this. The modified tuning, with the two lowest strings on the guitar tuned down even lower, makes this very easy to play.

*When Longfellow’s poem was published the next year it was titled “Christmas Bells,”  but it’s now best known through the hymn/Christmas carol set to music by John Baptiste Calkin.