Today’s words are from William Carlos Williams. Unlike our last post, I wouldn’t call this a love poem. Oh, I believe there’s an assignation between two people in the opening section of this poem, but affection seems missing and the desire, if present, seems to be questioned—no, that’s not quite right—the questioning of desire is silent, present in its absence.

This is another poem I came across at the Interesting Literature blog, where it was included in a round-up of seduction poems. We’ve visited a few of that type of poem here as well, with shepherds, nymphs, a merchant’s wife, and Williams’ fellow physician-poet Thomas Campion making invitations—but this isn’t really a proposition, any more than it’s a love poem.

Williams’ poem is not titled something like “Come Live with Me and Be My Love”,  it’s titled “Arrival.”  So yes, an assignation, but one with a schedule like a train or airplane flight, or as we’ll soon see, like a season. Is there desire in the unhooking of the dress? In modernist, Imagist style, that emotion is not stated, but the passive voice and sparsest of descriptions argues that it’s there and is not there.

After the poem finds itself, as many of us have or will find ourselves one day, in a “strange bedroom,” a sea change occurs. The woman in the dress has disappeared. In her place: an autumn tree, disrobing its leaves because the season is felt arriving. Again, desire is not mentioned—it wouldn’t be mentioned, this is an Imagist “show not tell” poem—but this image is also passive and rote.

I’ll let you feel and figure out the image of the final few lines yourself. The now naked woman as bare winter tree? Or is her presumably male companion’s body being synecdoched? 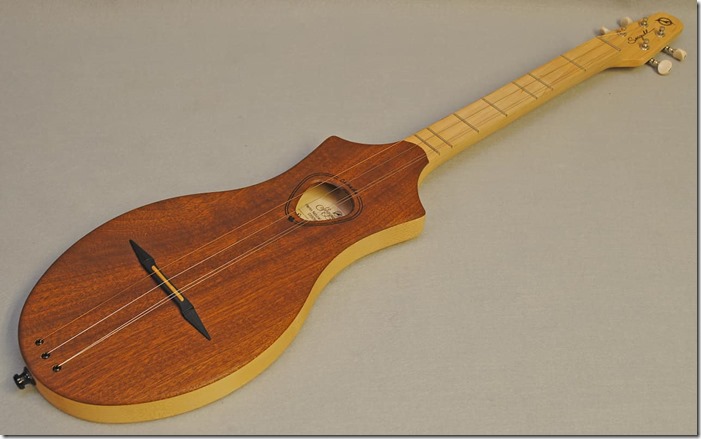 “A dulcimer in a vision once I saw” The Seagull Merlin dulcimer I played on this.

What of the music today? The instrument that sounds something like a mandolin is an Appalachian dulcimer, a simple American instrument; but one, like the sitar used in the last post’s audio piece, that has drone strings. The music is modal too, based around D Dorian. On the percussion side I remain attracted lately to little instruments, so there are shakers, maracas, a cabasa, congas, a chime tree, even some finger snaps in this. I could say that this is a connection to William Carlos Williams’ Puerto Rican heritage, but really, it’s something that is pleasing me musically this month.

Here’s the piece, use the player gadget below to hear it.

Did you like it? Want to help spread the word about this ongoing project to mix various words (mostly poetry) with various music? Hitting the like button here helps, but what does the most to bring this to the attention of new readers and listeners is to mention and share this blog on your own blog or on social media.

Want the audio pieces to listen to later? You can subscribe to the Parlando Project podcast on Itunes, Google Play Music, Stitcher, or wherever you get your podcasts.