A new month, and I hope to have some new pieces here with a focus on February and Black History Month. It’s also a new year, and there are now some new books and works available in the public domain that I can freely adapt for use here.

I found today’s piece “In Memory of Colonel Charles Young”  while reading one of those newly PD books, Alain Locke’s anthology The New Negro, An Interpretation published in 1925. This book was something of the premier book-length publication of what became known as The Harlem Renaissance. Unlike James Weldon Johnson’s anthology of just three years prior, The Book of American Negro Poetry, Locke’s book was a collection containing only the work of living writers, and with a particular focus on younger Afro-Americans who were just then coming to the fore. And so it is that after an introductory essay on “Negro Youth Speaks*”  by Locke that I began to read his selection of youth of his day with the first poet in the alphabetical section: Countee Cullen. 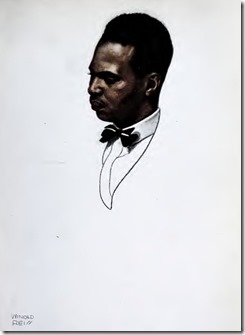 Locke’s The New Negro is a beautiful book too, with striking woodcuts and illustrations of the authors.

Let me once more demonstrate the gaps in my scholarly education. I knew Cullen’s name and little else about him. The various short literary assessments I’ve since read to get some quick handle on him concentrate on his eventual estrangement from the development of Afro-American literature and poetic Modernism in general because his verse used 19th century Romantic poets as its models, and as his career progressed there was a feeling that his youthful promise didn’t sufficiently develop. After the heyday of the Harlem Renaissance passed by, Cullen in the 1940s was teaching middle school. One of the young teenagers he taught? A kid named James Baldwin.

So, what stood out as I came upon “In Memory of Colonel Charles Young”  in Locke’s anthology? Well, there’s a mystery there for one thing. The poem read alone on the page seems to evoke something, but I suspect few readers will grasp what it means. Here’s a link to the text of Cullen’s poem. For me, and probably for you, that mystery starts right-off with the title. You may well ask: who the hell is Colonel Charles Young? Why would this young Afro-American be writing a poem about him? I need to tell you a story.

It starts in 1865. The American Civil War is raging. An enslaved Black man in Kentucky, Gabriel Young, escapes to Ohio leaving his wife and one-year-old son in order to join the Union army. After the end of the war, Gabriel uses his veterans’ pension to buy some land and a house for his young family. That toddler grows up to be a very sharp student, graduating first in his class in his high school. Perhaps thinking of the way his father had used military service to advance himself, that young man, Charles Young, decides to enter the U. S. Army military academy at West Point in 1884.

To say the least this was not an established path for an Afro-American in 1884. Indeed, Charles Young was only the second Afro-American to attend, and the first had entered only the year before and would become Young’s roommate at the school. The Academy had a well-established culture of hazing and a peer-discipline system based on fellow students issuing demerits on their own initiative. These pioneering Black students where therefore subject to every racist and discriminatory action the white student body could generate, and it was all so-easily cloakable as “tradition.”

Young persevered through all that, graduated, and was given his commission as a second lieutenant. He began his career in the still segregated U. S. Army in Nebraska and Utah with an Afro-American cavalry regiment. In 1894 he was assigned to Wilberforce College back in Ohio where he established the military services department at that historically Black college. He left there to serve during the Spanish American War of 1898, commanding a Black regiment in that conflict. After that war his military career took him to various assignments, including a time as the Superintendent of Sequoia National Park, various overseas assignments with Military Intelligence working at American embassies, and even a gun battle during the Pancho Villa expedition into Mexico in 1916. By this point he had risen to become the Colonel Charles Young of Cullen’s poem’s title.

And this brought upon the most remarkable event of his career as the United States entered WWI the following year. As the U.S. mobilized rapidly to enter the war, a veteran officer with war and foreign experience like Young should have been a prime resource. A white officer with a similar resume would have been rapidly promoted to general and put in charge of one of the regiments of the newly created expeditionary force. But this situation pointed out a problem with a segregated Army: there was no way to do that without making an Afro-American the out-ranking commander of some white soldiers. If there’s one thing white supremacists can’t account for it’s that, just maybe, there might be some Black folks with every demonstrated reason to out-rank them. Drives them nuts.

The Army decided to “solve” this problem by pulling Young from active duty, declaring him unfit for the war due to high blood pressure. Young attempted to refute that claim by riding on horseback from Wilberforce college in Ohio to Washington D. C., but less than a week after he arrived, the Armistice was signed to end WWI. 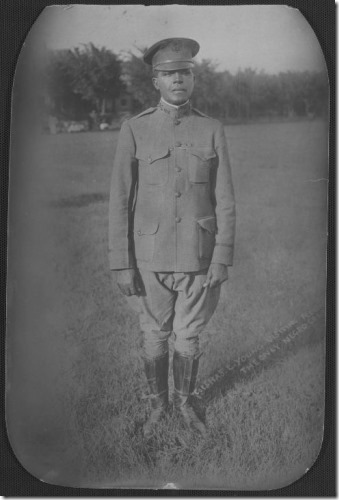 Colonel Charles Young at Fort Des Moines in Iowa, which was a leading training center for Black troops during WWI.

Young was returned to active duty however, and he died in 1921 while serving overseas with Military Intelligence in Nigeria. He was buried with military honors at Arlington cemetery, and thus we have the grave that Cullen would use as the scene for his poem.

So now that you know this as you read the text of this poem, or hear Cullen’s references to Young’s career in my performance, you should have a sense of its full import, one that should inform you as we celebrate Black History Month. Charles Young gave his full measure of service to America even if America gave him back something less than that. This is an example of what history is about. You may feel anger, puzzlement, gratitude, regret, or admiration at Young’s life. It might be most appropriate to feel all of those things. One task for poets and singers, from Homer to Countee Cullen, and onto you or me, is to be the trees with tongues to tell that Cullen ends his poem with.

The player gadget to hear my performance of Countee Cullen’s “In Memory of Colonel Charles Young”  is below. If you don’t see a player to click on, you can also click on this highlighted hyperlink to play the performance.

*There’s nothing untoward about that categorization. Odd as it seems to think of these men and women who I think of as of my grandparents’ generation as ‘youth,”  Countee Cullen was just 22 in 1925, the exact same age as our recent Inaugural poet Amanda Gorman is today.

One thought on “In Memory of Colonel Charles Young”