I know, I know. Some come to blogs like mine as a break from politics. Carl Sandburg used to mollify the editors of Poetry  magazine who wondered about the encroachment of his politics into his Imagist poetry by suggesting that no, he was a poet, an artist—and if a little politics snuck in from time to time, well he couldn’t help it being that it was part of him.

Well, he was a poet, but maybe he didn’t want Poetry  to know about the radical writing he was doing for the IWW at the same time he was writing his tight Modernist observations of our working life and living.

Woody Guthrie, who we might think of as the pluperfect tense of a protest singer, once said that anything that is human is anti-fascist, which would make a great deal of poetry into a political act, though I think he has to draw a rather gerrymandered line around the borders of human.

Many on the right find the continued use of racist and fascist as terms of approbation too broad a brush. I’d like to agree with them. I like exact words myself. I find in tired worn-out words a point of sadness, a heaviness in absence, a missed opportunity. But then sadness, oppression, and missed opportunities are not just dreary words I can discard for fresher ones, they are remaining realities.

Trump sucks the oxygen from a room, leaving only in the remaining vacuum assent or protest—but both of those are in an airless room.  I post this photo I happened upon this morning because some of you will find enough air to laugh*  and get some momentary relief from it. 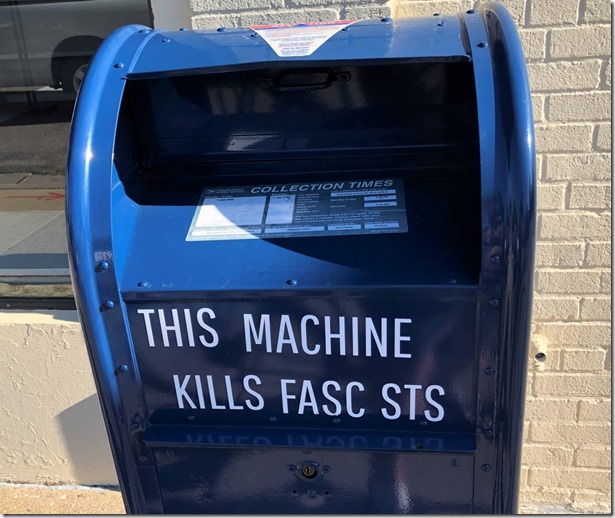 Listen up team, there should be no “I” in “fascist.”

Will there be a few that won’t get the joke? Well that’s what I’m here for! The story I heard was that Woody Guthrie saw a sign in a war materials factory during WWII, and appropriated it for his guitar. I like that origin story, because it reminds me that my job as an artist is to get my work done, even though we’re in an emergency or emergencies—perhaps best to do it because we’re in an emergency.

Those two women riveting an aircraft part in the collage above? That’s a very real part of a victorious war machine. Maybe they would also be part of the Seattle village helping raise war-baby Jimi Hendrix, an artist who made imaginary things. What does something imaginary have to do with winning a battle?**  Every struggle, every war, is fought for things invisible as well as real. All progress is moving toward the invisible, like a future humanity that has moved beyond fascism and racism.

No new audio piece today, but of course there are hundreds of them to peruse here as part of the Parlando Project. Here’s one of them by Sandburg about work that you can hear with the player gadget below.

*More joke explanation. Right now in the U. S. there is a frank and acknowledged effort to reduce voting by mail during the current pandemic. The hope among those in the current administration and Senate is that this might not increase the right voters but it could exclude more of the wrong ones. This assumes that potential right or wrong voters won’t get mad about this.

**As to imaginary things in service of the war effort, I found this article and picture of an elaborate disguise built on the roof top of the Boeing plant the article dates to WWII.  I have my doubts, the architecture and the long station-wagon dummy behind the security guard look post-war to me.

3 thoughts on “This Machine…”