Here’s a piece for today’s U. S. holiday: President’s Day.

Long-time readers here know that’s not going to be simple, but it may be interesting.

For some time in this project I’ve thought I’ll have to deal with Vachel Lindsay. In the early days of poetic Modernism a century ago, when no one knew exactly how that movement would turn out, Lindsay was a force to be reckoned with, with a life story and approach to his art that was so outsized, that if he hadn’t actually existed, and instead you created him as a character, you would be charged with unrealistic and exaggerated imagination.

In the great American tradition of bohemian artistry, Lindsay was not well-off, not Ivy League educated, nor born in some cultural capitol. By force of will he decided that he would make his way in the increasingly business-oriented world of the 20th Century as a poet.

How’d that work out? Better than you might imagine, if only for a time. He made most of his bones touring the country intensively, reciting his poetry in a flamboyant style. Much like the life of a musician, it worked only to the degree that he was able to keep up a relentless road-dog touring schedule. Between tours, what time he had to write was also the time that he fell into debt and doubt.

If you think that poetry should be, at least in part, a spoken art form, Lindsay was there before. If one wants poetry to be appreciated as a popular form, with no academic prerequisites, Lindsay lived that. If you want poetry to be a force for social good, Lindsay too. Slam poetry? Lindsay was doing that before there was a name. Poetry inspired by and linked with vernacular music? Lindsay, a century ago. 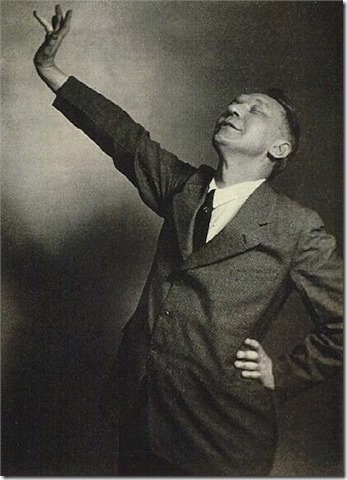 Vachel Lindsay is not doing the hokey-pokey here, but performing poetry.

So why haven’t I presented Vachel Lindsay before today? Three reasons.

One, he wrote a lot of bad or flawed poetry. Awkward, sentimental, not particularly striking in imagery, and despite his spoken word and musical inclinations, not always in tune with my sense of music.

Secondly, though he always claimed his heart was in the right place, his treatment of other cultures was so clumsy and ignorant that it’s too often indiscernible from racism. This isn’t a close call, or some case of modern politically correct revisionism, even in his own era this was noticed. It was more than 50 years ago when I first ran into one of his set pieces, “The Congo,”  and from that I figured I was done with Vachel Lindsay.*

These are both general reasons why Lindsay is not seriously considered along with his contemporary Modernists of the early 20th Century. But there is another, more personal reason: I fear the Vachel Lindsay in myself. When I see in my own writing awkwardness and flawed art, when I stop to consider the un-earned audacity of my own spoken word and musical expression, when I catch myself assuming that good intentions are sufficient, when I write here of other cultures and experiences, and despite my provincial and limited knowledge of them, perform works associated with them—then I fear I’m becoming my own variation of Vachel Lindsay. I continue to do those things anyway, stubbornly—again, like Lindsay.

Art is not just a place to model human potential. It’s also a revelation of human failures. Bad art can inspire good art. Failures illuminate as much as successes.

With that long introduction, let me now tell you that today’s piece, “Abraham Lincoln Walks at Midnight (in Springfield Illinois)”  is still worthy of four minutes of your attention. Unlike China or the Congo, Lindsay knows Lincoln’s adult hometown of Springfield Illinois, as it was his hometown too. “Abraham Lincoln Walks at Midnight”  is not a piece that extends language, it has no clever images that re-calibrate how you experience something, its word-music is not so beautiful that you’d be drawn to it before you even care what it’s about. We have long celebrated Abraham Lincoln as the President of our greatest national traumatic event, the American Civil War, fought over our greatest national sin, slavery. So, the poem has only an emotional, empathetic message, but this is all art delivers to us however plain or fancy the wrapping.

President’s Day is not a simple holiday today. Here’s my performance of Lindsay’s Lincoln poem. I kept the music simple enough and in that hometown key of C. The high melody part that sounds like a synth patch is actually 12-string guitar run through a lot of time and modulation effects and a compressor. The player is below:

*Here’s a recording of Lindsay reading part of “The Congo” which gives some idea of his performance style and also his manifold issues with understanding and appropriating African experience. And here are some excerpts of remarks on the poem and Lindsay.