The place of short epigramic poetry in our culture, and just a touch of Percy Bysshe Shelley, combine in today’s piece.

When people seek to stop the expansion of poetry in definition or in practice they will aim and fire at certain targets. If you look closely and slowly, you may see the bullet holes with their worn, rusting lips frozen in mid-kiss.

“Song lyrics? When you see them on the page, you can surely tell they aren’t poetry. And what about advertising jingles then?”

I’ll reply that it’s true that we don’t know if Sappho was a copywriter for hire, or worked independently—and frankly, the advertising jingle has passed into disuse anyway. One benefit of aging is that one can remember lost, golden ages when the rustic bards of old sang along the roads.

I speak of course of that mid-20th Century, Midwestern American Greek Anthology presented by Burma Shave. We know only the fragments of their work that scribes have preserved in illuminated HTML, but did these jingles really harm mid-20th Century poetry much?

Here was the scheme: an insurgent company that made shaving cream in Minneapolis Minnesota took to the idea of a series of small signs, enjambed with the broken lines of an epigramic poem, signed-off at the last sign with the company’s logo: its name in white flowing script. Cars sauntered on narrower roads in those days, roads that went farther between cities that had yet to leak out suburbs and housing projects. Car radios were an option not ticked off by every frugal buyer, and the boredom on the two-lane was an advertiser’s opportunity. Huge billboards, the epics of the roadside, might have pressed the budget of the Burma Shave company, but those little signs in series were another matter. Poetry, then as now, is a bargain. 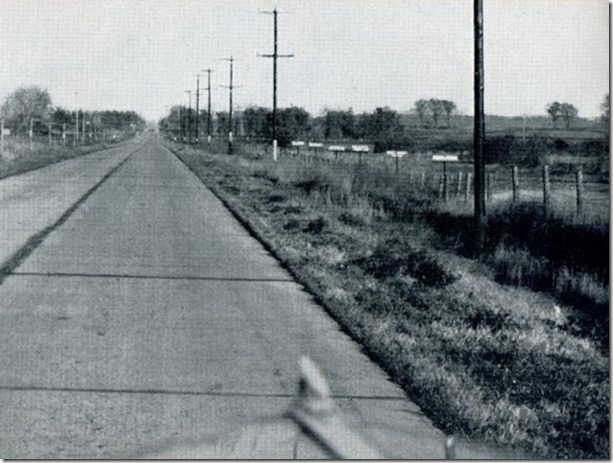 Poetry in motion, Burma Shave signs in use, circa 1940.

And to us, the naïve backseat riders with no tablets or Gameboys, we could hope then the horizon might give us that initial red sign and line of verse, followed by their episodic reveal, their enforced caesurae.

Perhaps the poems imagery or significance did not equal Elizabeth Bishop or Wallace Stevens, but the experience—yes!—was exactly what poetry should deliver. It comes on us, with expectation, but unpredictably. It reveals itself, in time marked with intervals that tell us it is indeed time. And in the end, it pleases us in a way that the passage of a mere Pioneer Seed Corn placard or another end-of-lane mailbox cannot.

Its motives may not have been artistically pure, but we didn’t care.

Commercial motives are as fragile as Olympian ones. Around 1960, Burma Shave was sold, and the brand discontinued. The placement of new signs stopped, and only in places where no one cared to groom the roadside did they remain to gradual ruin.

Years later I would move to Minneapolis, and eventually I would fall in with some folks who created a literary magazine that wanted to celebrate the inescapable, unpretentious—yes, sometimes commercial—main drag down Phaeton’s east-west path of the city. They called the magazine “The Lake Street Review.”  Down that street I would often bike or drive past a nondescript building, just before the freight-railroad tracks, just before the shopping-and-buying mall built were Minneapolis-Moline once built tractors. When it was built, this building had been a church, but as the area became industrial in the early 20th Century, the building became, for awhile, the headquarters, the factory, the Parnassus of Burma Shave.

I don’t know if any of us knew that. I only found out as they planned to tear it down, which they did. As the workman did a workman’s job, in the midst of the ditch of lathe and beams, a red sign with cursive white letters was found at the end: “Burma Shave.” 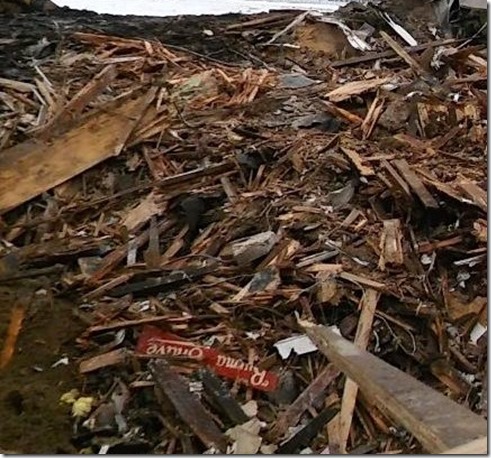 “on the pedestal, these words appear…” After the Burma Shave building was torn down.

Musically, the LYL Band performed “Shattered Visage”  a couple of years ago, but I share it now after this week’s presentation of Shelley’s “Ozymandias.”  As I said Monday, I read “Ozymandias”  without bringing out the pathos in the the impermanence of human achievements, choosing instead to emphasize time’s judgement on tyrants, but in “Shattered Visage”  my parody turns to the former. One other link to “Ozymandias:”  remember Horace Smith, the second-place sonneteer who also wrote an “Ozymandias?”  He entered into literary circles with a spoof he authored along with his brother, where they imitated all the most famous poets and orators of their time, including Lord Byron, who supplied an admiring blurb when the collection was published.

To listen to “Shattered Visage,”  use the player below.